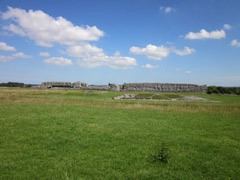 The first buildings that we think of as castles are the Roman Saxon Shore Forts. These were constructed during the first to third centuries following the invasion in AD53. Ten castles were built between Hampshire and Norfolk and parts of most of them still survive. One, Pevensey, was still in use during the Second World War. Other stone fortifications guarded the borders with Wales and Scotland, the most impressive being Hadrian's Wall. After the collapse of the Roman Empire it was another eight centuries before such powerful defences were required.

The next castles to be built in England were constructed in the middle of the 11th century by Edward the Confessor and followed the pattern being developed by the Normans who has conquered France. A mound, or motte, was raised up to one hundred feet in height. These could be a natural feature, a man made mound of earth or a combination of the two. A wooden fortification, a keep, protected the top of the motte and another surrounded the motte and some adjacent land forming a bailey where most of the inhabitants lived. A ditch outside the bailey was an additional defence. An example of one of the first castles of this design is Richard's Castle in Herefordshire. 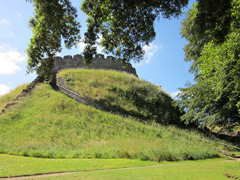 Immediately after the invasion in 1066, the Normans commenced a massive programme of castle building to protect themselves and local supporters while they advanced across the rest of the country. These initially followed the same motte and bailey design, and were predominantly constructed of wood, but some later ones such as Totnes Castle (pictured left) are believed to have been started with stone defences. The earliest keeps were generally circular, but rectangular or square ones became more popular as it was easier to construct living accommodation inside. Some of these early castles still remain but many were abandoned as the invasion progressed. Those that did survive have been extended over the years but the remainder either have vanished altogether or just a motte still stands. 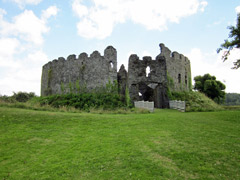 The motte & bailey design was the standard defence of the 11th and 12th century, but the shell keep, a much larger keep on a lower motte into which most of the accommodation could be fitted became more common in the 12th century. After the invasion was complete there was time for more extensive defences to be built up in the most important cities. By 1085 there were approximately 100 well defended fortifications built both by the King and his Barons. Wood was readily available across most of the country but is not the ideal defence because of its flammability so existing structures were rebuilt in stone over the next 100 years.

Initially some were simple rebuilds, but from the last quarter of the 11th century (until the middle of the 14th century) larger, more powerful square stone keeps, protected by an outer stone wall, were designed, for example the White Tower at the Tower of London and at Rochester Castle. Circular keeps came into use from the middle of the 12th century as they had no weak corner spots that could be undermined. The disadvantage was the difficulty of building living space inside, but to overcome this a few were circular on the inside but square on the inside. 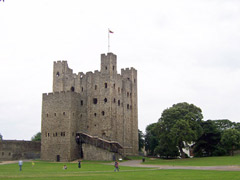 Towards the end of the 12th century castle building became a royal prerogative as the Barons had lost much of their earlier power. King Richard 1 instituted a new system at the end of the 12th century known as a Licence to Crennelate which required the Kings's approval before new buildings or fortifications were constructed. The designs of new buildings slowly evolved with the emphasis towards high walls which were well fortified with towers. The keep lost its importance and was often replaced by a tall strong gatehouse - a barbican. The towers then were placed closer together and were more numerous.

As the next stage towers were added to provide a concentric structure where a breach in the outer wall could still be defended from an inner defensive structure e.g. Pembroke & Beeston castles. Additional baileys protected with walls were also added to existing castles such as Corfe and Chepstow. The most highly refined concentric castles date from the late 13th to early 14th century during the invasion of Wales when a string of purpose built structures was erected across North Wales including Caernarvon & Harlech castles. These were the last of the massive residential castles to be built by the monarchs and most are still in good condition, due mainly to the strength of their construction. 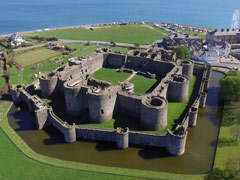 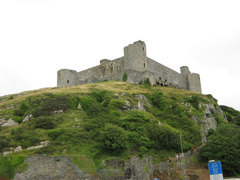 Whilst renovation of the existing major castles continued, new developments in England between 1350 and 1450 were limited to smaller structures such as fortified manor houses built with high walls and towers, and tower houses or pele towers, like stand alone keeps. These were built mainly by rich landowners rather than the nobility and were often constructed of brick, rather than stone. Whilst these buildings provided protection they were not as strong as earlier castles as they were built to be lived in with comfort and often had large windows. Pele towers were very numerous near the Scottish borders.

During the next hundred years, the changing political climate meant that there was little need for new castles and fortifications. This continued until 1540, Tudor times, when the threat from abroad re-emerged. To defend the coast a number of new, extremely strong and well armed gun batteries with a low profile and a central keep were constructed close to the shore such as Calshot and St Mawes castles. In terms of their design these would be better described as "forts" than "castles". 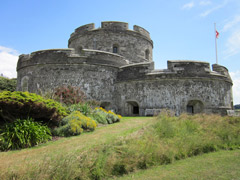 This period, from 1642 to 1660, caused the downfall of so many of the once splendid castles of England and Wales. Sieges and cannon bombardment caused massive damage, and towards the end of the war many were punished by slighting or destruction of the major defences to prevent them being used for future conflicts. Following such damage the most common outcome was that the castle was abandoned and its stone was removed for building local houses. Castles that were spared this damage were mainly those held by the Parliamentary troops and which were essential to the defences of the country, which is why those like Windsor and Dover castles are still in such good condition today. This marked the point in time when the development of armaments outstripped that of stone walls and a new approach to defence was needed. 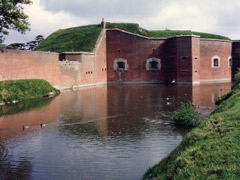 The final stage in the development of English fortifications started in the 17th century, but only fully flourished in the period 1860 to 1880, in both cases as a response to invasion. In general the low profile of the 1540 castles was maintained, but the construction now was of earth and brick with dry moat surrounds. The exception to this were the 103 early 19th century Martello towers protecting the coast of East Anglia, Sussex and Kent.

The most extensive and final construction of major fortifications was that of the 79 Palmerston forts of the 19th century defending the Thames and the coastal naval bases of Plymouth, Chatham, Dover, Milford Haven and Portsmouth. These were a mainly land based forts but six additional structures were built in the shallow waters approaching three of the ports.

These low level forts were never tested in combat, but before the end of the 19th century they lost their effectiveness as armament technology developed rapidly. Within a few years of their construction the size and design of cannon developed and rapidly and the range of guns increased from 3 miles to over 15 miles meaning the forts could be destroyed by ships that were potentially out of sight over the horizon. For more information see the A brief history of Armament page.

There was a last flourish of "castle" building in the 19th century when a number of extremely wealthy industrialists built their new mansions to look like castles - Castell Coch, Bodelwyddan.
The final stage in the development of defensive structures in England and Wales took place in the 1950's and 1960's with the creation of deep underground nuclear shelters - very strong but nothing to look at!

The distribution of castle building across England and Wales century by century is shown on the "Locations (Century by Century)" page.