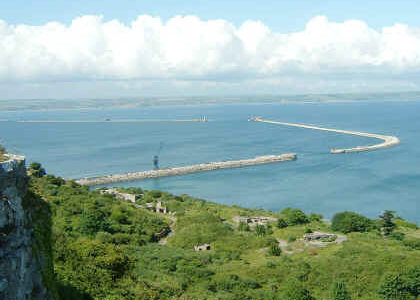 Breakwater Fort is at the end of the second stretch of the breakwater. The breakwater itself was started in 1848 and is three and a half miles in length. The 120 foot diameter circular fort was planned in 1859 and was to be built of stone on a stone rubble base and equipped with 35 guns. By 1868 the design had to be totally changed due to subsidence and instead it was rebuilt in the early 1870's with steel armour plating on a concrete base.The seven 12.5 inch Rifled Muzzle Launched (RML) guns were not installed until 1892 and were replaced by 2 modern six inch Breech Loading (BL) guns on its roof in 1907. It was abandoned in 1956 and is now derelict.

Not open to the public.