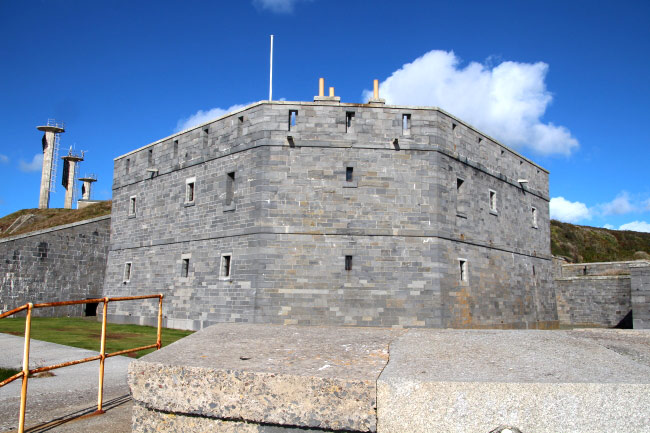 The first defence of Milford Haven were the East and West Blockhouses which were built the 16th century as part of King Henry V111's south coast fortification programme. West Blockhouse was described as being a round tower, 20 feet in diameter, with eight gunports.

West Blockhouse Fort was built in 1854-7 on St Anne's Head as part of the fortification of Milford Haven ordered by Lord Palmerston, to counteract the perceived threat from Napoleon III. It contained accommodation for a garrison of 34 men and one officer. It was armed with six 68 pounder heavy guns and commanded the entrance to the harbour, with defensible barracks behind to give protection from attack on the landward side. It was demolished at the end of the 19th century when West Blockhouse Battery was built on the same site and there are no visible remains.

In 1902 the fort was superseded by a new gun battery, West Blockhouse Battery, when it was decided that with newer, longer range armament it would be more effective just to protect the entrance to the Milford Haven channel. It was armed with two 9.2-inch BLs and three 6-inch BLs.

The fort has been owned by the Landmark Trust since 1969 and can be rented out as holiday accomodation.